Navigate a treeview with the tab key

Came across this post in an msdn forum and thought that cant be too hard, well its a little tricky which is why I have blogged it!


Firstly I created a form with the treeview and some nodes on it, and two buttons (you will see why soon!)


Then I tried plugging in to the key press event - however this doesnt fire when the tab button is pressed:( - however the previewkeypress event does:).


Now I need to get the tree node to expand when I click the tab button - a node has a nice .expand function so this was easy:)


This worked really well, apart from the fact that the tab button still tabbed to the next item! This means that the selected node changes, but the treeview loses focus. I fixed this by adding a boolean which is set to true if focus should be returned to the treeview, and simply checked it on the item after it, on the "enter" even I see if the boolean is set to true, and focus on the treeview if it is.


The final problem was caused by the shift button - if you press shift and tab users expect to go in the opposite direction to tab! thankfully the arguments to previewkeypress includes a .shift, so I simply went backwards, and used the same code on the button before the ! 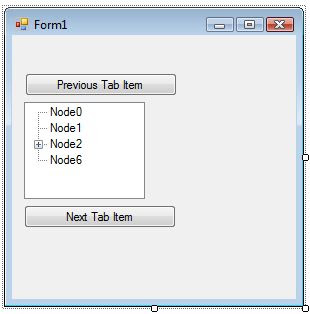 Here is the code:


Ross
at 11:27 am
Email ThisBlogThis!Share to TwitterShare to FacebookShare to Pinterest
Tags: C#, msdn, windows forms