What a fantastically well organised event. I know a lot of people are annoyed by the fact that Scott Guthrie was talking (not being from the "community" or perhaps because he works for Microsoft), but I strongly oppose this view. The fact is I probably wouldn't have attended the talk if he wasn't going to be there. Scott has helped so much - in my eyes Microsoft have gone from a closed giant stuffing products down your throat and not caring what you think just so long as you are paying, to a provider of great software releasing CTPs to get our opinion and most importantly they are now listening to it!


Secondly as I mentioned I probably wouldn't have been there if it wasn't for Scott, and as a result I attended talks on Microformats, Ruby on rails, and cardspace. This allowed the conference to reach a completely different audience, and that has to be a good thing.

Anyway back to the event! We were very well looked after, some good freebies and plenty of good grub (see the pic of the Microsoft sandwich. A little bit surprised they weren't called vista sarnies or wow sarnies, perhaps the only spot that Microsoft missed for advertising!) 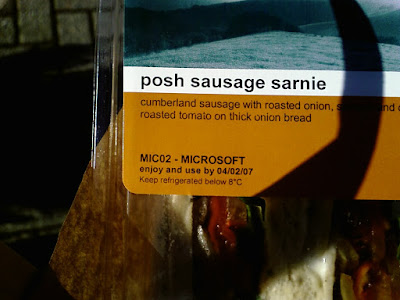 I'll do a posting on each of the sessions I attended as soon as the slides are available (perhaps sooner).

Overall I'm going to rate the event 4 out of 5, would definitely attend the next one (if I can get tickets!)

at 9:32 am
Email ThisBlogThis!Share to TwitterShare to FacebookShare to Pinterest
Tags: Webdd